Recently I’ve done a lot of work on performance and load testing a variety of back-end systems which required huge JSON objects containing lots of different fields. In load testing, its useful to really push a system in terms of memory, cache and its disk space, which requires every bit of data we send to be unique.
Fortunately, the developers had already created a POJO project that documented the JSON schema in code, however, this only provided the skeleton of what the JSON should look like, but didn’t physically generate any data.
Initially I wrote a lot of Scala code in my Gatling project to use the POJO to define test data for my requests, however when we have 200+ different fields this quickly became a nightmare to maintain and confusing for newcomers to understand.
This is where I came up with the idea to create a 3rd project to define test data, splitting it out from my Gatling project so that it was only concerned with code that controlled load tests. 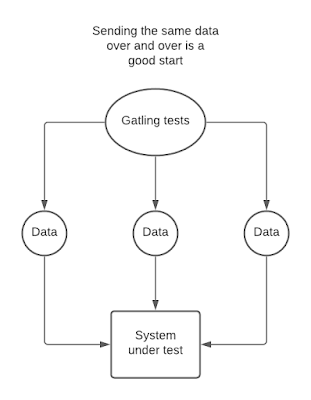 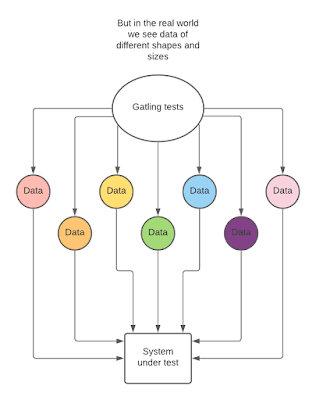 Here I have created an example of what a data-model project could look like:
https://github.com/matthewbretten/example-json-data-model

It is basically a code representation of a JSON schema, where we define what a particular object looks like, so in this case I’ve gone with an example of a shopping basket where it has particular nested objects such as “customer” and fields like “name” - also defining what type of data these are (such as String or Integer).
In my context, the developers had already created this and used it within their Java applications, so there wasn’t any work for me to do originally and it was extra useful to share the same effective “contract” in a sense - if the model changed it was only changed in one place and it was simply a case of increasing version numbers.

This pulls in the above data-model as a dependency and then goes a step further and provides functions that return full JSON strings. It has definitions of what various fields should look like and controls how random this content is.
So for example, in the JSON schema we define objects such as a Name:
“Name”:”String”
Whereas in this project we are now defining and controlling what content we get in the String - we could make it totally random strings “Acse1234fggDG” or we could attempt to make it realistic “Billy Boat”. In this case I’ve provided some examples where we randomly select from lists of reasonably realistic data - this is limiting the “randomness” of the data but keeping it more useful. Depending on what you’re trying to test, you may want to change it so its more random.
The key point here is that we have a neat Java project to easily define and control this behaviour.

Here I have created an example Gatling project that uses both of the above projects as dependencies:
https://github.com/matthewbretten/gatling-example-datamodel-pattern

This defines our load tests, controls how many requests per second and where we send the data. However, the data is now fed from the test-data-generator project, the advantage being that all of that code is now kept separate and keeping the amount of Scala code to a minimum. The latter was relevant for me because many of the developers and testers were not familiar with Scala - so keeping the load test code simple and understandable was valuable. 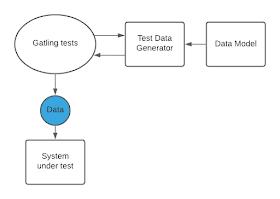