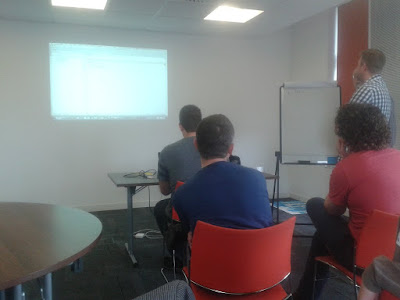 Now that I’m armed with some better knowledge of the context of how mob programming came about and some experience of what it’s like to be a part of and facilitate, I’ll carefully consider it as a tool to suggest in future. I can see that if a team is already collaborating and working well together, pairing and mobbing in an informal sense, that this approach may not be necessary. However, I’m looking to build a healthy stock of ideas and tools to try when the time arises and if nothing else it’s always useful to try these ideas and see if there is anything we like about them.
In the scenario of rapidly sharing knowledge about a particular technology or language, I think this formal approach of mob programming could be very very effective and I will be looking out for opportunities to do this.
In summary, I highly recommend this workshop if you’re interested in the subject! As I’ve said a lot in this blog post, Woody is great and I got everything out of the workshop that I wanted to.
Posted by Matthew Bretten at 20:49