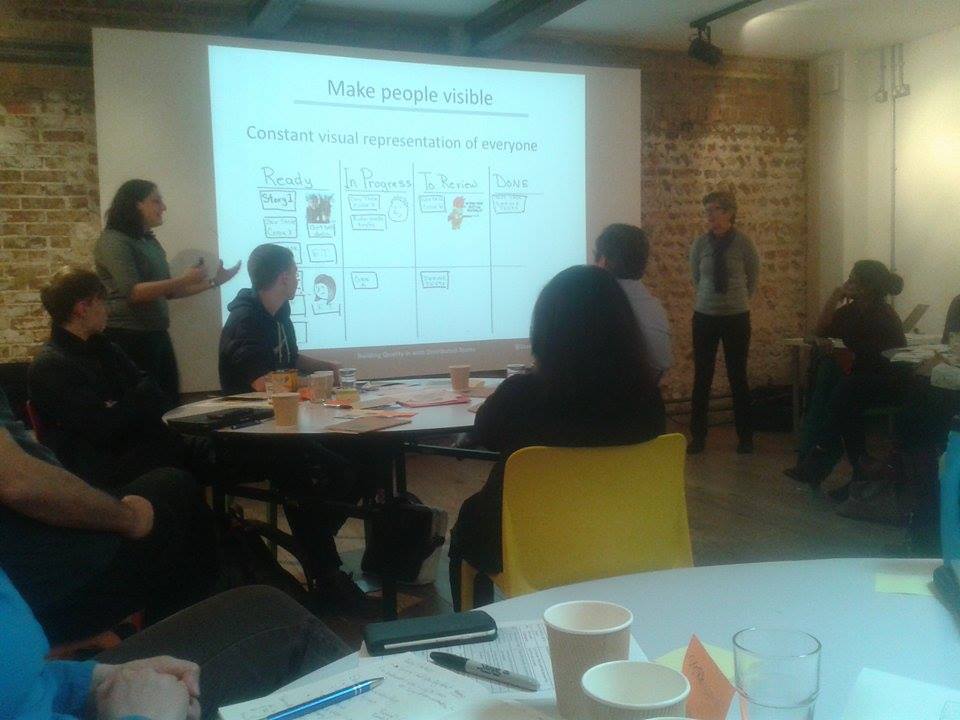 Today I attended a workshop being run by Lisa Crispin and Abby Bangser called ‘Building Quality in with distributed teams’. I hadn’t expected to be going to this workshop until Rosie alerted me to a company giving away a free ticket to attend. So once again thank you Rosie and Inviqa for letting me know and sorting out the ticket for me!
I’ve not got a lot of experience working in distributed teams (that is, teams that are separated by location typically, such as in separate countries). But I was looking forward to learning a lot about it and speaking to other testers who clearly were already dealing with this challenge.

The workshop was just run in the morning, so it felt like a more condensed style compared to the 3-day RST course I had just finished. However, I was once again taking a ton of notes as I was eager to learn from the vast experience present that I could talk to about this subject!
The workshop began with people sharing their experiences and challenges with distributed teams before we were split up for a task. The task took up the bulk of the workshop and was an interesting little experiment with communication! I don’t want to give away too much about it, but the idea was we would split up into groups and try to carry out tasks in a simulation of ‘onshore’ and ‘offshore’ teams having to work together to satisfy a tricky product owner. This was a really fun task and there were so, so many behaviours and problems that came to the surface. I think even if you don’t work with distributed teams, this workshop can be very useful because the ‘us & them’ mentality can be seen even within the same office!
I’m really forward to talking about this workshop when I get back to work because there were so many funny similarities that I think we will recognise in our own work.
It was also nice to meet some new people whose background was naturally more from a distributed orgaisation, so I could really probe them for information and understand their challenges, I’m sure one day the information and tips will come in useful! It was also nice to attend as a novice in the field, it stops me from talking too much about my experience and forces me to listen better to people.
Oh and also, I also got do a little pairing work with Llewellyn Falco who I recognised from a talk he did with Maaret Pyhäjärvi on developer-tester collaboration. He was very quick to jump straight into finding ways to pair up on the task, which was a learning experience all in itself for me!

All in all, it was a fun workshop and I was surprised (I should really expect it!) how much I learnt from it, even how much I could recognise and tips that I could apply even at my current workplace. I would love to have a go at running the same task again one day!

Today we’re headed to the beach to a bar called Ohso Social. I’m expecting a lot more people and a lot more new faces at this meetup as it’s the night before the main conference. I’m keen to find out the details of how the various other workshops went for other people, I would have loved to attend Richard Bradshaw’s workshop on Lego Automation or Martin Hynie’s on TestOps which I believe includes exciting technologies such as Docker for setting up test environments quickly!

Tomorrow is the main conference day with a ton of speakers to listen to. The conference runs all day from 9am till 6pm so I'm making sure I take a nice big empty notebook to fill! I’ve also allowed myself to get talked into doing a 99 second talk in front all of these people so I’m more than a little nervous about that! I’ll be spending the rest of today thinking about what the hell I’m going to say! Wish me luck!
Posted by Matthew Bretten at 15:10